"Is he alright? Or is he dead? Check his pulse.come on quick....is he breathing?",the commander was rattling off his commands at a rapid pace, into my earphones!Already perspirating with tension, I forgot all about hierarchy, and shouted into my microphone, " would you just SHUT UP and let me concentrate?remember, I am the Doctor, not you...!!" I could sense him seething with rage, but realising the gravity of the situation, the commander decided to stay mum!

For the records,I had just landed abruptly on the planet Xylos , with my one-man space shuttle knocking down a Xylian civilian on my ill-conceived touchdown route! I had frantically got off my shuttle, to check that my victim was not killed, because this was a mission where I had been hand picked by Earth, to start off a mutual exchange policy with the Xylos civilisation , and the last thing needed to start off a diplomatic relationship with a foreign planet was the killing of a native on his own soil, by the inhabitant of a foreign land! And to top it all, my nosy commander from earth, had seen it all , through the live images that were being sent back to earth,through the camera embedded in my helmet!
Bending down, I felt for his wrist to take a note of his pulse. From the intelligence we had about Xylians, they were Android (human-like) living beings, with their bodies being pumped by a heart-like pumping chamber , that was driven by a battery fitted to the heart muscle, much like our artificial pacemakers! A previous attempt to take back a dead Xylian to earth to analyse their body anatomy had been a public relations disaster , that had spread widespread hatred among Xylians, and needed much persuasion from earth , to prevent a Xylian invasion. So, not much was known about the Xylians' body physiology! But common sense prevailed, and indeed a pulse was there, that was being too erratic for my comforts.Not wasting any more time, I set off on a vigorous chest compressions procedure! 1-2-3,1-2-3 went my efforts in a few cycles ! The blow that had floored him hadn't done him any external injuries, but I diagnosed, he had suffered from a Sudden Cardiac arrest courtesy the collision . I ran inside the spaceship & came out with an adrenaline injection, hoping & praying that I am not too late! Even with all my training in Critical Care on earth behind me, I was still nervous as I pierced the rather tough skin and pushed the piston of the syringe!
'BOINK' ...the giant eyes opened . A split second we were eye to eye, and then , instantaneously , I was floored to the ground , with he standing over me,with a queer expression on his face! I tried to mumble, " I am so ....s-s-s-sorry....I d-d-d-dint mean to hurt...." , but the Xylian pored down at me! His eyes developed a bar code scanner type of light , that hovered over my forehead , and I realised , it was analysing all the electrical impulses that were running in my brain! In a few seconds, I was helped off the ground, and then , the Xylian was smiling cordially at me! I didn't need to put in any efforts to explain myself, he had scanned my brain and gathered all the requisite details needed to guarantee that I meant no harm! 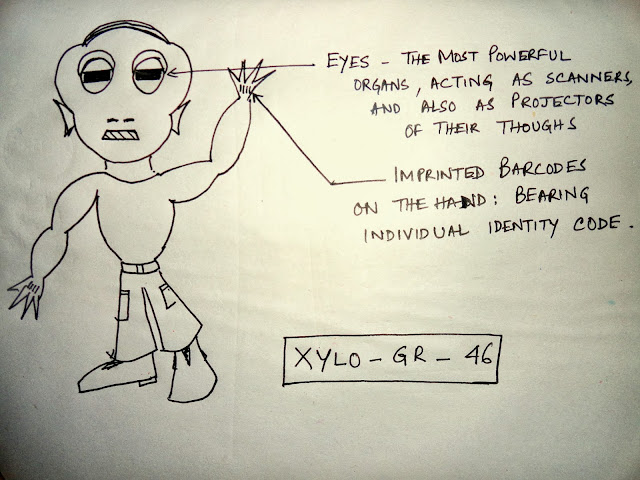 "Welcome Earthling! Me Xylo-GR-46 ! " .... The voice was programmed like it was coming from some computer hidden within his body! He had picked up my language in no time,but the fluency was lacking , so he did something , that took me aback ; he simply channelised his vision and projected it onto the ground , with his eyes working like a projector! I could see myself being feted in their Senate, with pleasantries being exchanged ! all of this appeared straight from his brain and panned out in front of my eyes like a cinema reel playing out!
He proceeded to take me to their small town. As we walked, I could see small red hillocks all round. The land was full of Iron, so in case of human beings setting up a civilisation here, cultivation would be one tough quest, I felt. I was hungry, my guts cried out for some food! The sound was rather awkward, and I thought my host wouldn't mind it! To my utter embarrassment , he pulled out some nut-like objects from his pocket, and offered them to me! I put one of them in my mouth......the taste was pretty ordinary, (there wasn't any taste that I could assign to it)but still, it tasted a lot like the stuff that we grow back on planet earth. I wondered what it was, when Xylo-GR-46 yet again thrust his eyes onto the nut, and it broke up into its chemical structure! I racked my brains for the vaguely familiar shape and burst out laughing : it was C11H22O11....the structure of carbohydrate! Those were pure blocks of carbohydrate, that didn't have any taste, but delivered the energy needed to the body! 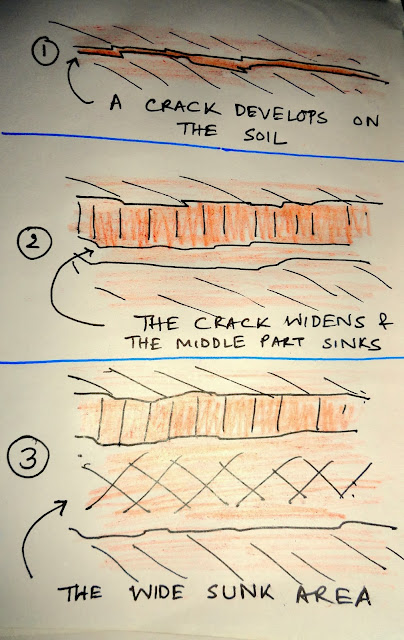 As I walked , suddenly , a crack appeared on the soil in front of me, and spread rapidly across the land! A huge chunk of land got depressed, and I was in danger of falling into it, so shocked I was by its sudden appearance! But my host nonchalantly grabbed my elbow, and jumped across the 10-feet wide depressed soil, without any effort! Amazed, I tried to jump , and I was hurled about 30feet to the front! I realised that the gravitational pull of the land was much much lesser than that of earth! My host again started showing me his mental videos, that depicted the frequent sliding of the soil across the land. The shearing forces at work on the land made this a day-to-day event that they didn't bother about anyhow. However, I had noted my point : all those who had aspirations to build their homes on Xylos would need materials to withstand this lateral movement......all of this planet belonged to what we refer to as Grade 5 earthquake prone zones on earth; and hence would need special construction materials, with more tensile strengths! 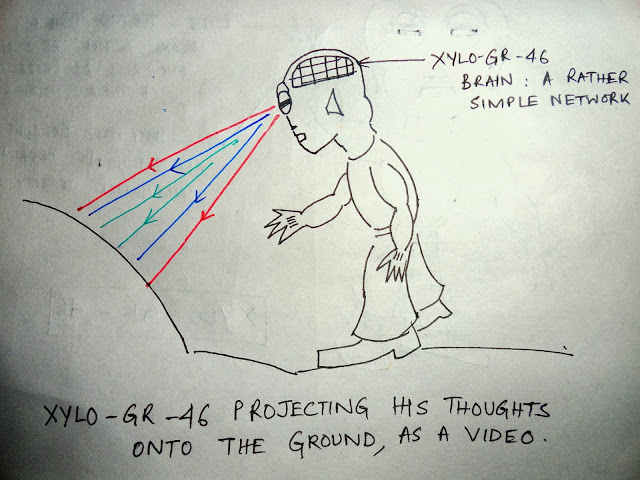 Walking into the town , I was surprised by the simplistic plan , on which the buildings stood! The main residential complexes were arranged like polygons! Xylians, all big & small, frittered around, talking less, and doing some work! Nobody was sitting idle. Amongst all the small huts was a large building , that was the Senate!
The leaders who were at the helm of the planet were all gentle people , who greeted me with warmth! The main diplomats took me into an isolated chamber, and all of them read my brain thoughts, so I needn't utter a single word about what the purpose of my visit was! Then, they started portraying their own visions to me! I saw Xylians travelling to earth, being enrolled into our Universities , learn our ways of life! They were picking up the nuances of microwaving food, the concept of motor-driven vehicles, and In exchange, they would allow human settlement on Xylos, and research & development work across the minerals on their planet, on which they themselves have not been able to make much progress, despite being quite an evolved race! One more thing that intrigued me was their seeking of help, against a militant organisation within their planet, that launched unprovoked attacks on their Government organisations! The sole aim of this organisation was to prevent any sort of communication with Earth, and they believed, any such transaction was sacrilege to their proud establishment! I understood that it was a conservative minded section among the Xylians, who wanted to stall progress , by the exchange of ideas between two planets, and thus have now become recognised as a militant outfit! 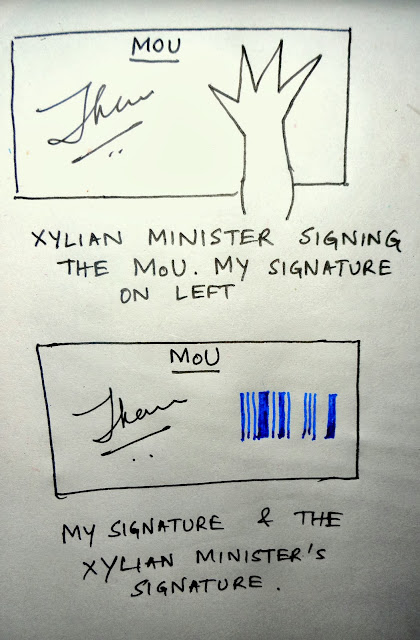 By this time, my commander was a happy man! His purpose had been fulfilled, and he had seen everything through the eyes of the camera! My instructions were loud and clear; to sign a MoU with the Xylian minister to start off the projects as soon as possible! But on the paper I provided, the minister simply rubbed his hand......and a Unique Barcode was put in place!

Mission solved, I proceeded to take my leave! Just as I exited the senate, two small fireballs passed right in front of my eyes, and I was transfixed ! The two Xylians who were escorting me hurled me to the ground and with their handheld shields, deflected a third fireball. I now looked at the direction from where the ambush had taken place.....two hooded Xylians were preparing to throw a fourth missile, which looked like an Earth-equivalent of crude hand bombs! I pulled out my laser gun , took aim , and in two swift shots, the duo were finished off! The minister thanked me for my actions , and I needed no explanation to understand that these were members of the organisation that they were in combat with! He also urged me once again for earth's intervention to rid Xylos of this menace!
As I boarded the spaceship to embark on my return journey, I was full of pride! My venture had started off on the worst note possible, but some on-spot decisions had me returning to earth as a successful collaborator, rather than ignite yet another controversy in the Earth-Xylos relationship! As I felt smug, my commander's voice rang out yet again in my ears,this time in a more cheeky tone," Well done Doctor! So,....when do you intend to return to Xylos next?"

this post is written as part of the 'I Am Explorer' contest by Tata Safari Storme. you can find out more about this super dude of an automobile here.