Safety Begins with Self : a take on road safety issues in India


One day, sometime in October 2002 , I was exposed to an altogether new episode of driving in India. I don't know whether to call it 'rash' driving , or 'mad' driving .....because either way, it was an insane experience , being driven by a genius of a driver , who perhaps had chosen a wrong platform to display his skills. He was the driver of an SUV that drove our tourist party of eight , from Lava Lolegaon to Kalimpong , on hill roads more convoluted than an entangled piece of wired headphone. As a 15 year old, I remember spending the entire journey , with my heart in my mouth , sitting beside the driver , staring at the speedometer once , and the breathtaking scenery on the other . Never did our driver slow down the SUV : at hair pin bends , he was at 30 Kph , while on stretches that afforded a little more length, he was consistently above 70 Kph...........and our road had a steep hill on one side, and 1000 feet deep gorge of the Tista River on the other !

When my Dad asked him what exactly he was trying to do, he calmly replied, " Sir! This is the proper way to drive on the hills ! I'm sticking to my lane,driving alright, no ?? "  When Dad further said , " you might be correct , but the  drivers of cars coming from the other side might commit a mistake ! " To this , he had said, " But that is not my concern ,right? I'm not driving wrongly ! Trust me , I know my job .....you people from the plains are too afraid ! "                    There was no further point in arguing with him , but to be honest , we reached our destination , without even a single untoward incident , which was unthinkable in such a difficult road , that had danger  all along . Our driver was definitely brilliant , and he was proud of his skills , but even after 12 years , I fail to comprehend why didn't he have the good sense to be a little more cautious ?? Or was it that he was incredibly blessed with driving skills and good fortune ? I'm reminded of his antics more so when on flat , plain land ,on roads as smooth as blocks of marble , people suffer from horrendous accidents , mostly due to human errors . It doesn't pay to be careless , specially when we're on the roads with high velocity automobiles all around, and not everyone can have superlative driving skills and good luck . So why flirt with danger ? Why not stay on the safe side of the law , and at least hold up one's own end ? Traffic rules are not exactly Hebrew , and even illiterate people can understand the signs .......but what we fail to understand is that the laws in places are for our own protection only , and not cooked up by the Traffic Law Enforcement to extract fines from our side.

One of the major curses of civilisation is Drunk Driving . With every millilitre of alcohol that invades our bloodstream , our consciousness and decision taking abilities are suppressed just that extra bit more . It doesn't take my knowledge of medicine to know this ; everybody is aware of it , but good sense fails to prevail just when it matters . Most people cannot pass the chance to show off bravado at the wheels , and this trait  takes a turn for the worse , when 'high' on highways , people delay that fraction of a second due to impaired reflexes , leading to grievous injuries or loss of life.  The most unfortunate scenario arises when a harmless civilian or a law-abiding driver on the same road suffers from fatalities owing to the callousness of the drunk driver. The amount of awareness drives currently in India on drunk driving is appreciable , but needs to be maintained . Also , our officers-on-duty need to perform Breath alcohol analyser tests to determine the levels of drunkenness , and consequently , impose hefty fines for the culprits . There needs to be a register for repeat offenders , so that they can be slapped with higher sanctions.

Seat belt and helmets are two of the best devices that human beings have made to counter case fatalities due to errors . But we , as individuals get into an issue of ego , when asked to wear these devices . Many motorists consider wearing protective gears akin to an insult to their 'extraordinary driving skills' , as everyone nurtures an inner Lewis Hamilton or Sebastian Vettel ! Even though events like the NSDF has increased the awareness of wearing seat belts by 126% , there are 'wise' drivers , who simply place the seat belts across their bodies , without fastening them , so that they are not fined by the traffic guards . Many of my friends , who are avid bikers, hate wearing the helmets , because they say , the air rushing across the face gives them a kick, when they ride......but the helmet robs them of this kick! It has been beyond my wits to explain them , that not wearing a helmet can get them 'kicked' out of the world forever! In hospital , while on duty on Orthopaedics emergency , most cases come from motorbike accidents ....and our seniors used to joke that bikers provide bread and butter to orthopaedic surgeons! 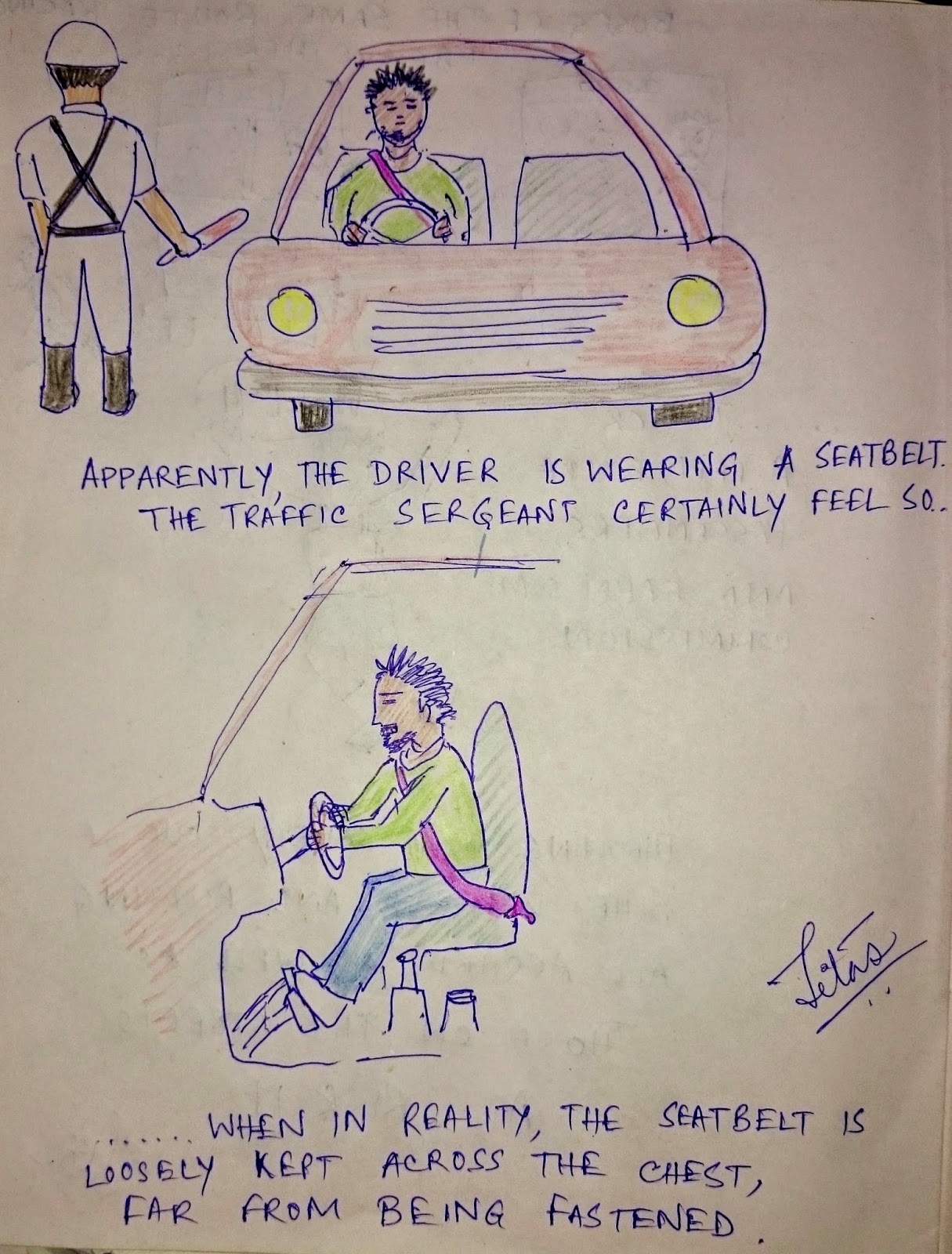 Traffic sergeants can do random checks on people who they suspect having just placed the seat belts across their bodies . As for not wearing helmets , sanctions are already in place , but many times, the culprits take the help of by-lanes and alleys instead of the main roads, to avoid getting caught ! I would suggest random checks at the smaller roads by the traffic guards , to bring more offenders to book.
I don't know about the scenario in other parts of the country , but in Kolkata , casualties due to two private buses racing each other on the same route , are rampant. This occurs , as the helpers and drivers vouch for picking up more passengers per trip , and try to overtake each other , so that they are entitled to a higher commission , since their payments are based on passenger count. This menace has been long known in Kolkata , but the private bus owners turn a blind eye to the matter , as everyone looks after personal gains. Fixing a payment for each trip for the driver and helpers , irrespective of the number of passengers , should be able to bring down the number of offences . Also, if the on-duty traffic sergeants see such a scenario, they should communicate with other sergeants and  penalise both the guilty parties , before an innocent bystander is run over . 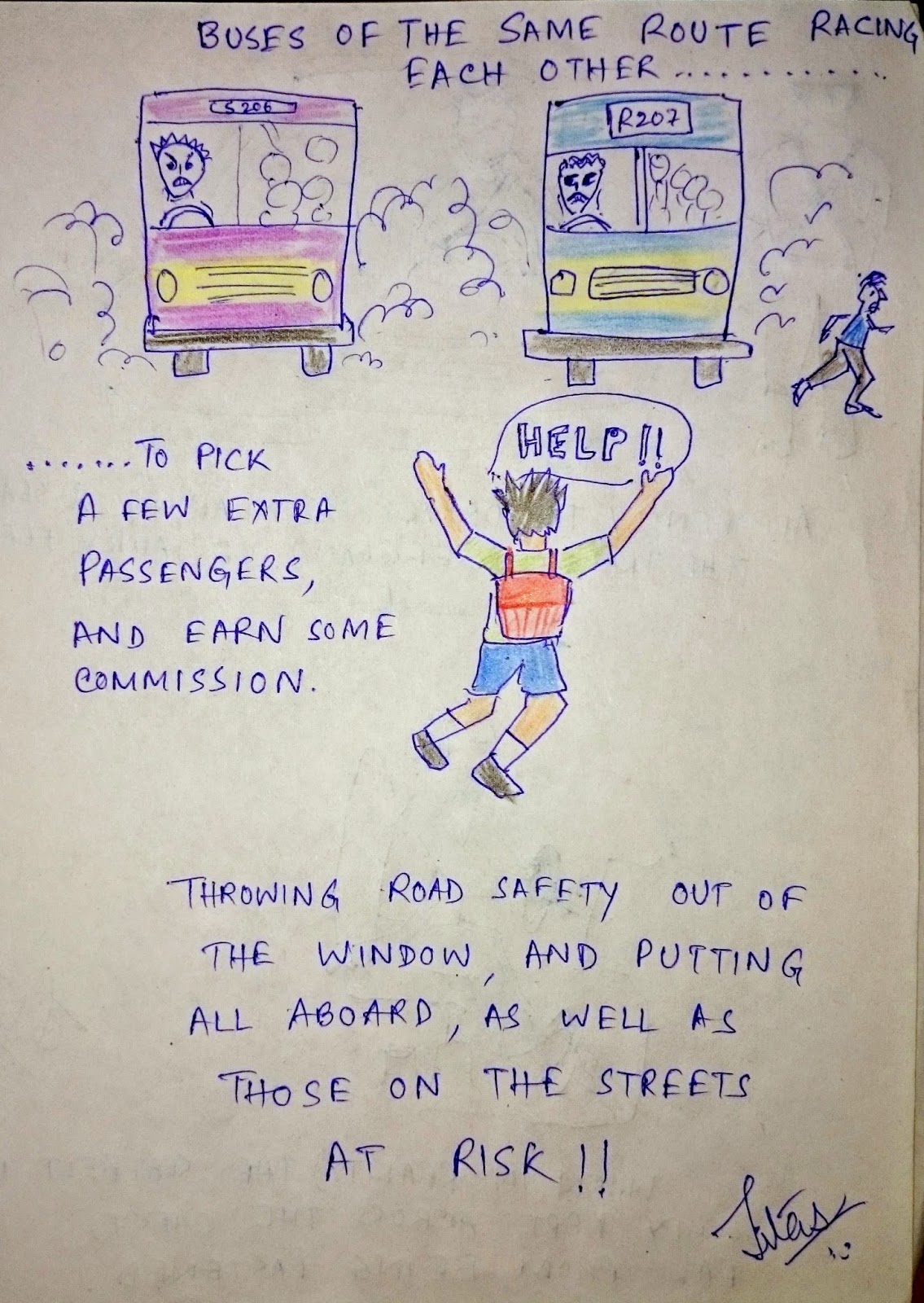 Most people turn blind on seeing signs like "No Horn Please" or "No Parking" , and inevitably , in India , we'd find excessive car sounds where such a symbol is in place , or a vehicle being parked across a No Parking sign . These are often petty issues to the ones committing it. Many a time , a person sees a shop , and parks his car in front of it , to buy something , while keeping the engine running . Even though the road apparently looks empty while he's getting off, his mental time calculation is way off the mark , and by the time he has completed taking his change from the shopkeeper, there's a traffic snarl , with aggrieved motorists cursing from all directions , due to the car blocking a narrow road. 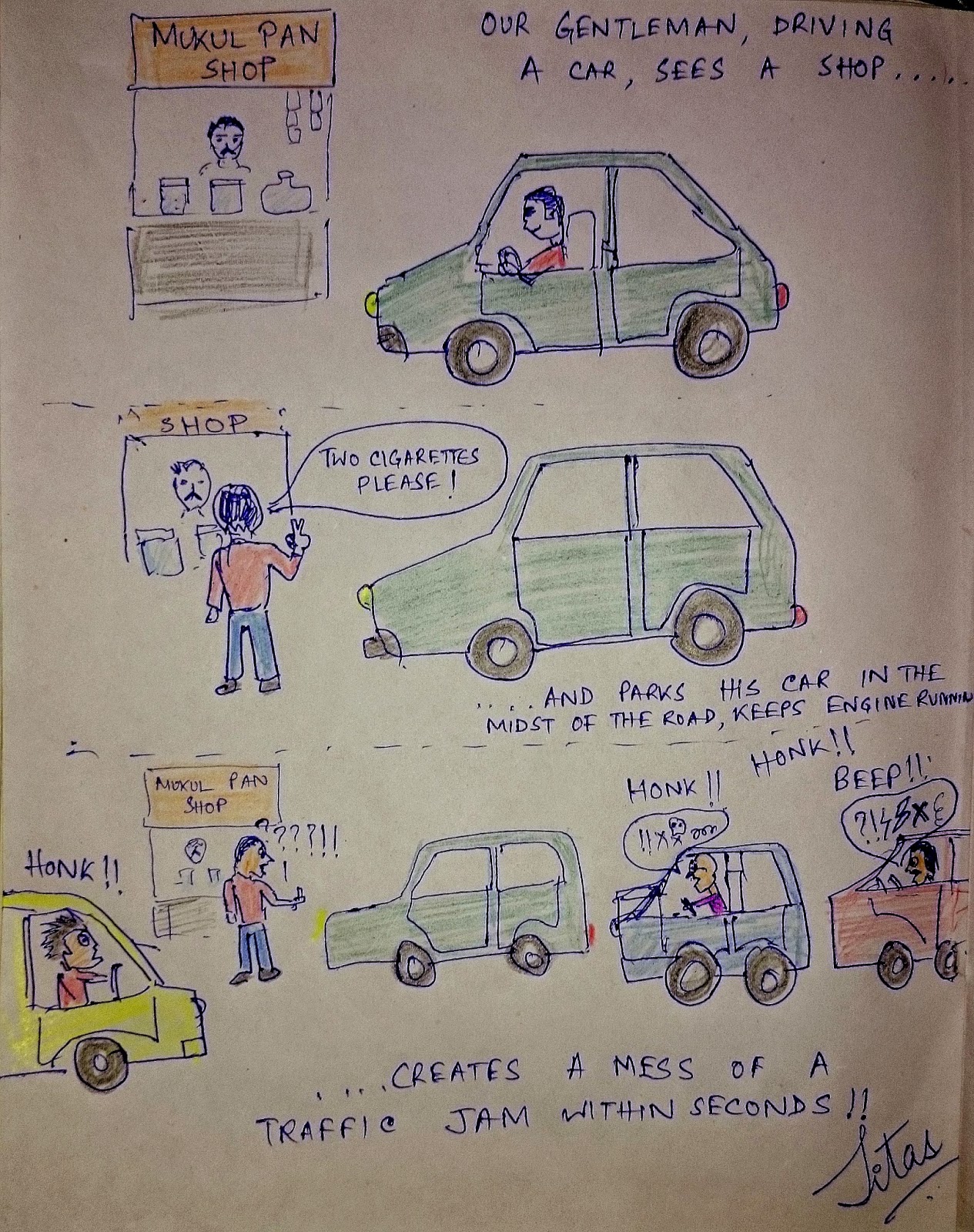 Another seemingly trivial rule , that can save a lot of trouble , is not opening the door on the wrong side of the road . Once we reach our destination, we are in perennial hurry to get down , and so, forgetting the cardinal rule, we open the door on the road side , inadvertently sending a cyclist coming from behind flying across the road by the sudden collision . Often , the issue is minor, but if misfortune strikes, then the person can fall straight onto the path of another approaching vehicle . This is an etiquette that every car driver should always keep in mind , because nobody has the right to trouble another individual due to carelessness. 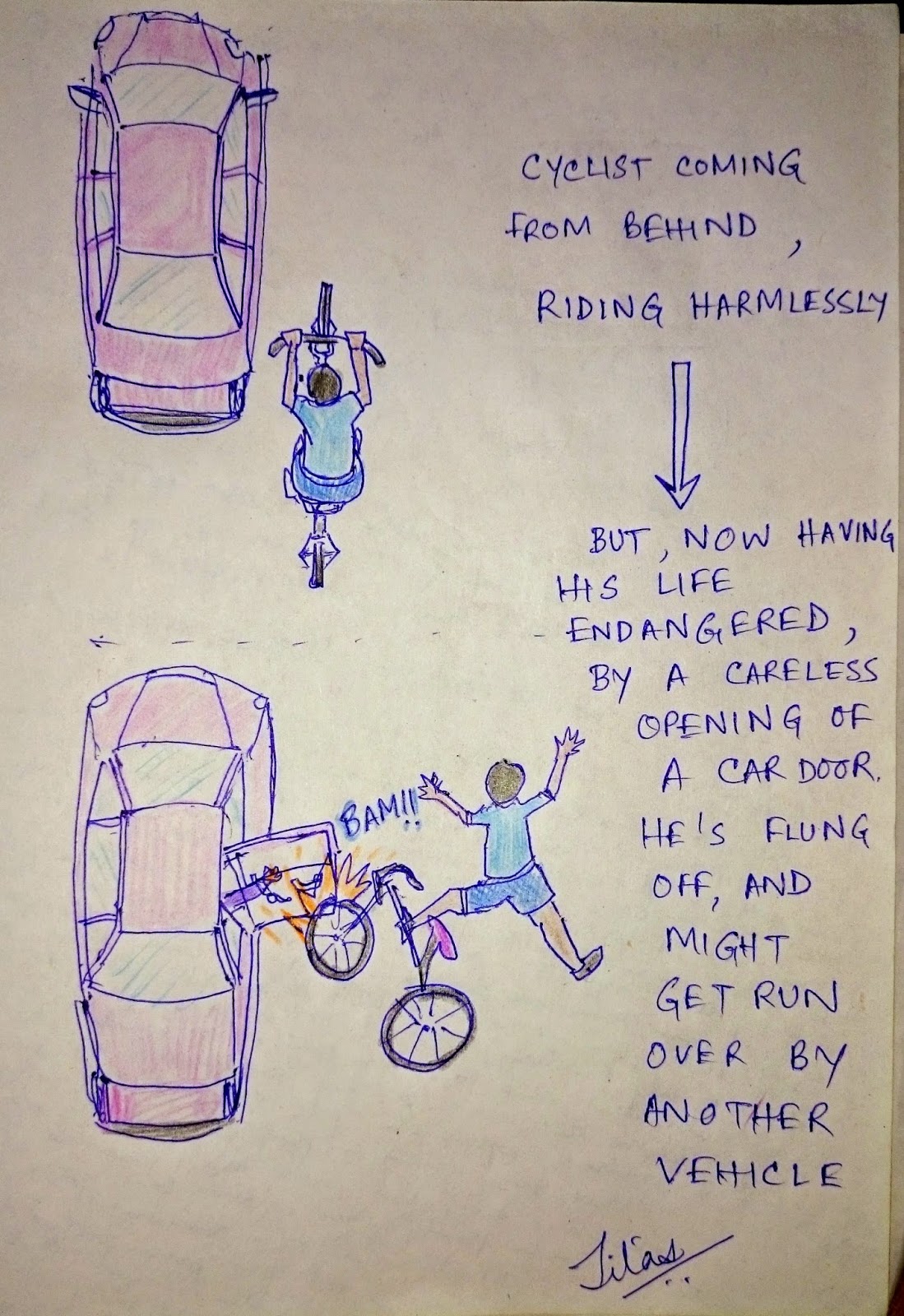 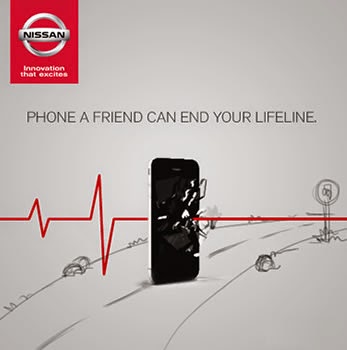 Hands free mobile devices were invented to make it easier for people to communicate that they were on road, driving a car......and not to discuss an entire office project while on it. So , while phone car kits are welcome, focussing on a discussion is not , as the concentration shifts from what's on the road , to what's on the mind. We've also seen people bending their necks to insane angles to wedge a phone between the face and the shoulder , while driving a car or a bike . We need to remember , a phone call might get life's connection disconnected forever.

People have all sorts of superstitions about their cars, they follow different rituals , and hang specific items inside the cars to ward off bad luck. But It doesn't take a lot to obey rules, and it certainly means a lot if one believes that Road Safety Begins With Me ! Which brings me back to that hill driver in 2002 , who believed he followed all the rules, but lacked some common sense.

Before pointing fingers at others for committing errors , we should register in our brains the knowledge imparted from sensitising drives like the NSDF , that has gone all out to make one city safe at a time. We at Kolkata , would certainly like to become a part of the Blue Citizenship of Nissan and have first hand experience of this venture , and the NSDF should definitely be held in this part of India to make more people aware of the safety protocols to be followed while on the road. 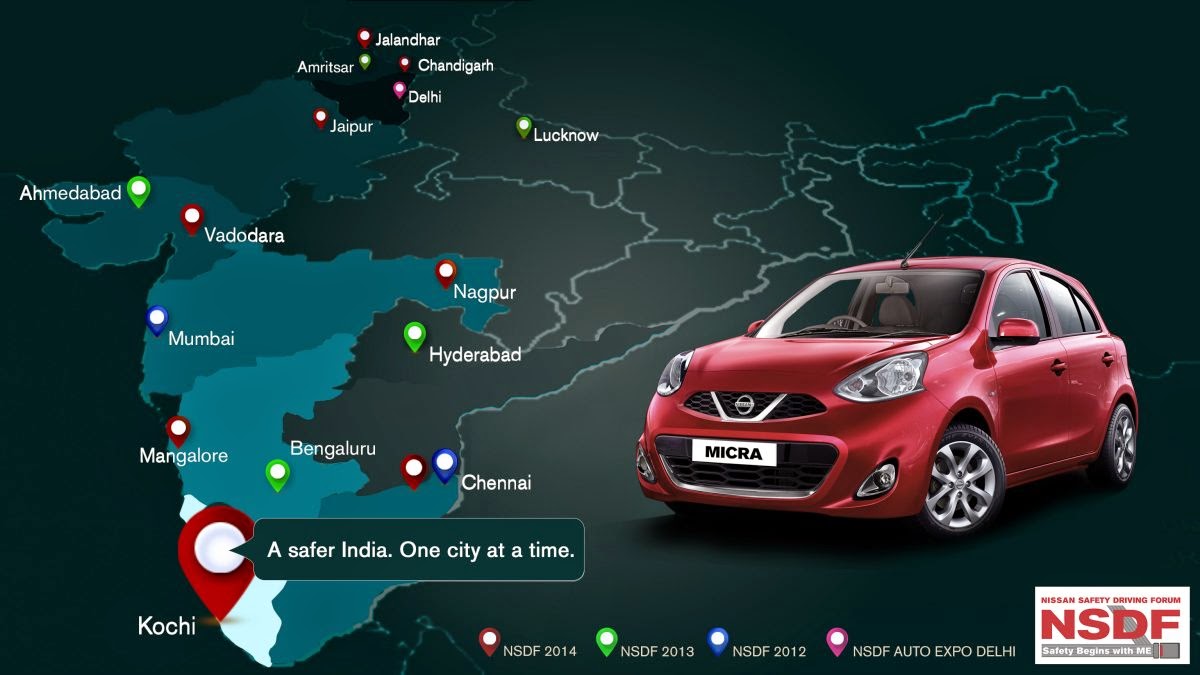 Written as part of the Nissan Safety Driving Forum nationwide road-safety campaign , in association with Indiblogger . You can find out more about the campaign, that reinforces the thinking of Safety Begins With Me here.
Posted by Titas at 19:32