Attending college at 8 AM was a sort of punishment that only the harshest of individuals can mete out to an undergraduate . If Gen Y had set the standard timings for education, I can well assume that a convenient timing would be a college that starts at 2 PM , enabling the student ample time to wake up at 11 AM  after sleeping off the internet hangover from the previous night, amble through his combined breakfast+lunch , take a bath & finally reach college at a little past 2PM , when the eyes are drowsy no more. It's not sacrilege these days to flout the age-old proverb , " Early to Bed & Early to rise, makes a man Healthy wealthy & wise!" The young guns today have increasingly turned to becoming nocturnal.......but that's not a scenario the college authorities would approve, so the professors would bestow upon the student this cruel ordeal of having to stutter all the way to college , feeling groggy , with the body's biological clock protesting vehemently against it being massacred this way. Almost as if on cue, the ritual that got neglected the most was bathing , and sure enough , I had people smelling somewhere between stale pieces of vegetables to an unclean garbage vat in the morning classes. Most people coming from the hostel, clutching a notebook in one hand , and trying to flatten the hair standing awkwardly on their head by the other , fell in this category. If it was winter , some of them made bathing a monthly event , so for us day scholars , bypassing them was a-trick-a-minute event.

One of the sacrifices i had to make in this regard was to let go of my inhibitions of sitting on the front benches. Attending college had made this a custom for us to be Backbenchers-by-default , and we were deterred by no amount of coaxing, cajoling or warning by the professors to come to the front of the class. But magically enough , we realised the only way to avoid the smelly hostelites early morning was to block the front benches . Sure enough, to the extreme surprise of the professors, we were there , sitting at the very front of the class, trying to look attentive as he taught , while our focus was fixed on not breathing in that polluted air ! The window seats were of high demand for this reason too, as it provided the seat occupant with the oxygen cylinder, that could replenish his severely depleted stock of fresh air from time to time, as he was forced to turn his nostrils outside. 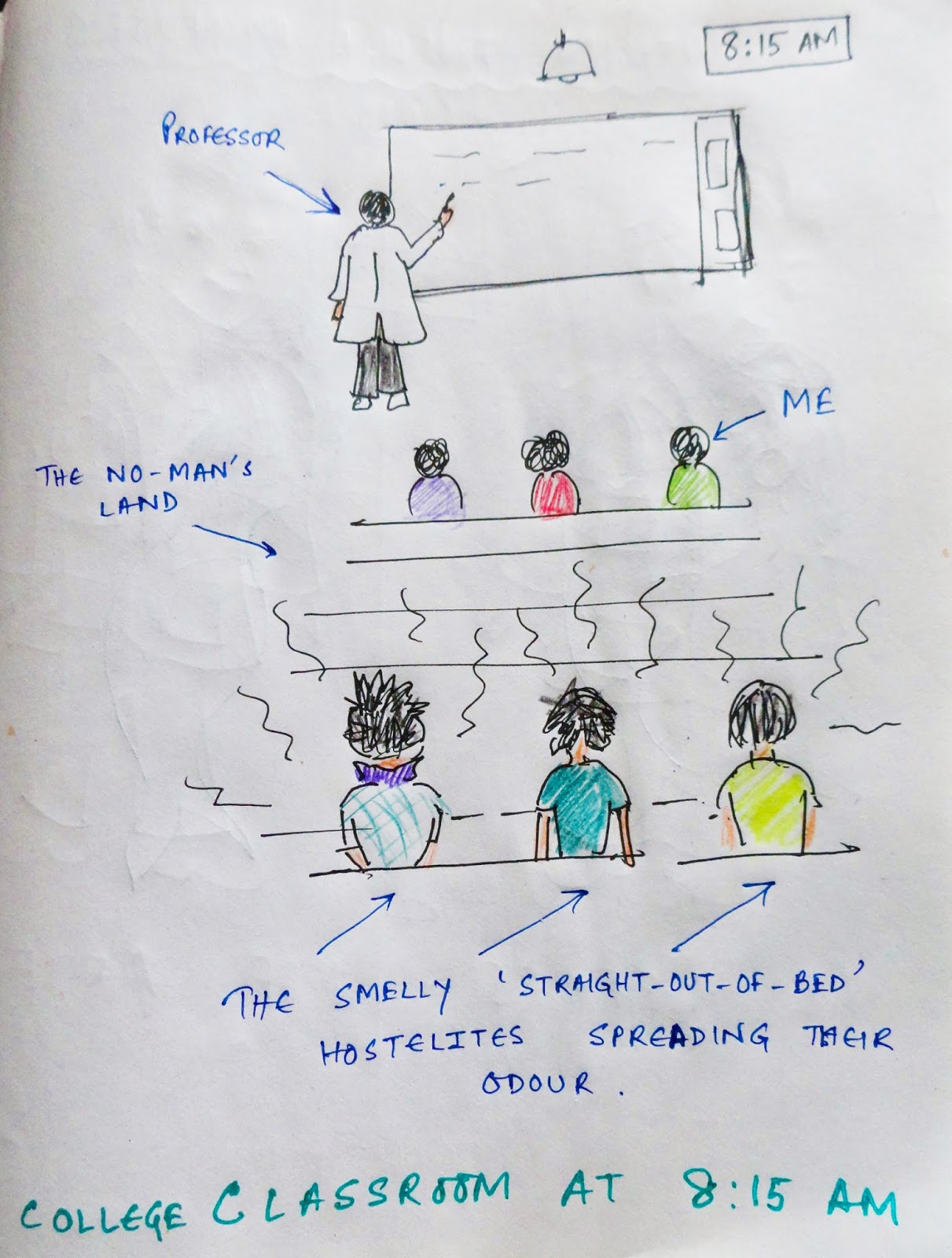 Selective breathing too was quite helpful , as I chose not to respire much , when an unavoidablel interaction happened with some of these smelly skunks. Doing deep breathing exercises helped , as I could build up my respiratory muscles to hold on to my breath for a longer period of time , as I ticked off the seconds spent talking to him, before rushing off for an imaginary assignment , that would help me take a deep breath of fresh air again.


Sometimes, I wondered , whether the poor souls themselves didn't feel punished by having to smell so bad, and I had once ventured to ask one of them, a friend , as to when he had bathed last !
"Why?", he was rather surprised I had asked this.
" Because , to be very frank, you smell like you've been fermented!" , I was candid.
The friend was incredulous," WHAT? I have put on the best deo in the market ......I can myself smell it!"
I was in no mood to explain that what he was smelling as deo was just a figment of his imagination, as, even the costliest deodorants would never claim to suppress the odour emanating from a putrefied corpse, and skipping bathing made my friend smell no less!
I felt for these folks from the hostel..... Simply having an instant water heater would set this malpractice of theirs straight , but nobody cared less, while they stayed on , spreading Smell Pollution , and getting stigmatised !


written as part of the "close encounters of the smelly kind" contest by Racold Thermo Ltd, in association with indiblogger. You can find out more abut their instant water heaters on their facebook page.
Posted by Titas at 10:25