The Crazy Kannas: who can't Keep Calm during IPL !!

"A treat at the Golden gate restaurant, in exchange of doing my evening shift in Medicine, on Saturday?? ", I was trying to lure Aritra into an agreement for giving my replacement in a scheduled duty during my internship.
"One treat ?? ONE???? ", Aritra sneered! "Huh, one won't do!"
"OK... Another one next month!" , I was pleading, out of desperation!!
Aritra looked satisfied,"Fine! But remember, no going back on your promises!"
And there was me, the hapless soul,left poorer by a couple of thousand bucks ,courtesy my promise of treating my co-internee at the costliest restaurant near our medical college. All this, because the Kolkata Knight Riders had a crucial match slated against RCB on the Saturday evening, and as luck would have it, it coincided with my duty hours at the hospital!! Aritra knew fully well , that he could arm twist me into promising two treats at the restaurant , considering my fanaticism for KKR's matches, and he utilised his opportunity ! The cricket freak in me had willingly volunteered to part with a substantial percentage of the meagre monthly stipend that a desi medical intern is entitled to, since he couldn't afford to miss the tie played at the Eden gardens, whose tickets he had managed to procure somehow!!
This sort of sums up my addiction for IPL, which has become the yearly bonanza for us cricket fans !! The fact that a team , representing the city you live in, is striving out every time to fight on a national level to uphold the city's pride, in front of a global television audience , makes the adrenaline go bonkers , that is reflected in our enthusiasm in cheering for every single home run !!
In the locality I live in,there's a community of die hard KKR fans,who've stuck with the team through thick and thin, right from the time of inception of KKR!!

We've organised Pujas and a few other rituals to ensure victory for the knights !!
We have put curfew hours around the TV on match days .....marking the calendar beside the TV set in bold RED ink to notify match dates!

We've made the KKR flag a part of our room decor !! Srinjoy was smart enough to drape his dad's new car's seats in the KKR flag!! 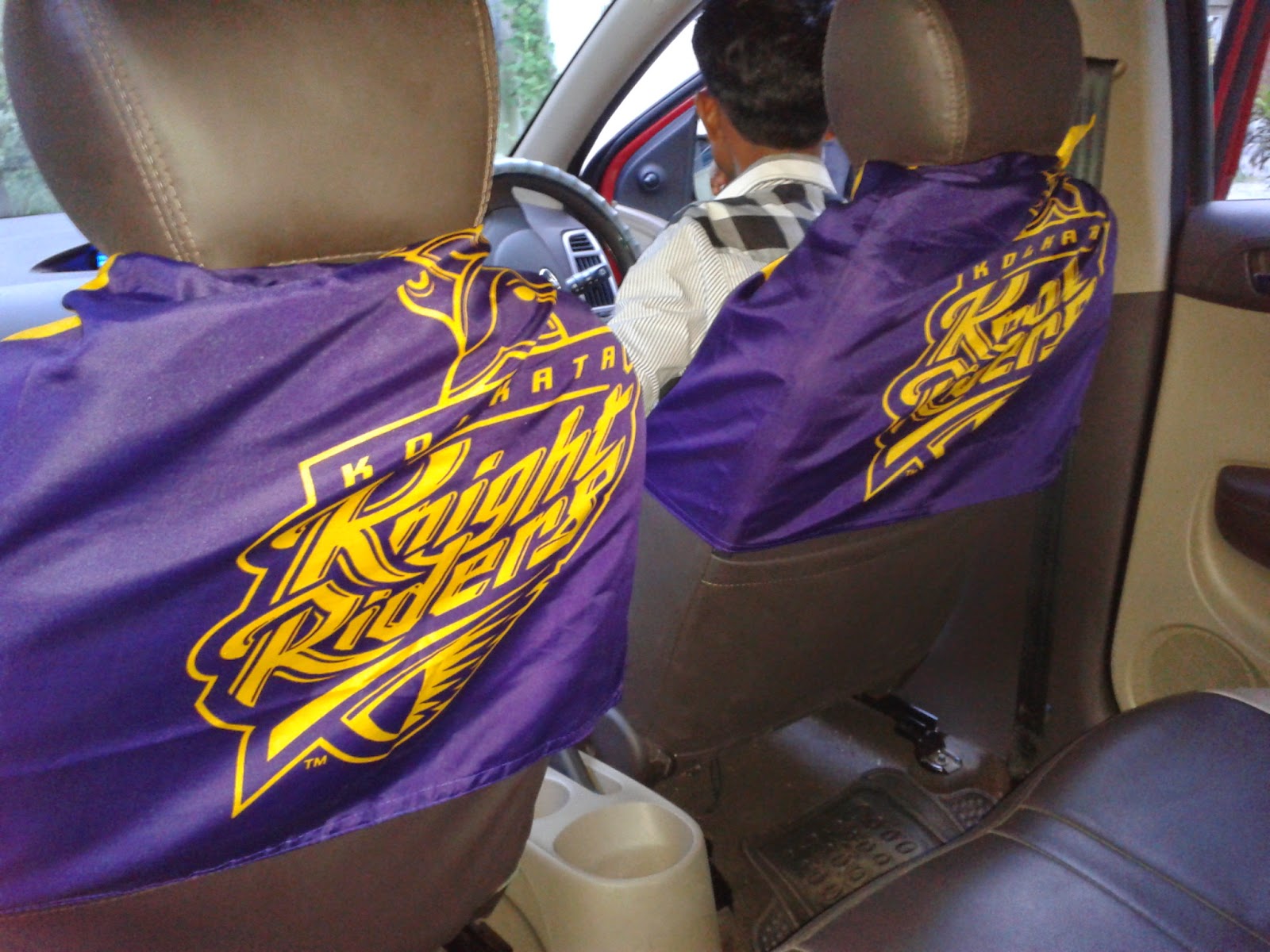 There's this Facebook community that my friends have set up that details the heroics of KKR !!

We've made multiple appearances in the Kolkata newspapers , courtesy our antics for KKR , that range from struggling through a thunderstorm to reach the ground despite no chance of play, to celebrating vigorously when KKR won the IPL !! 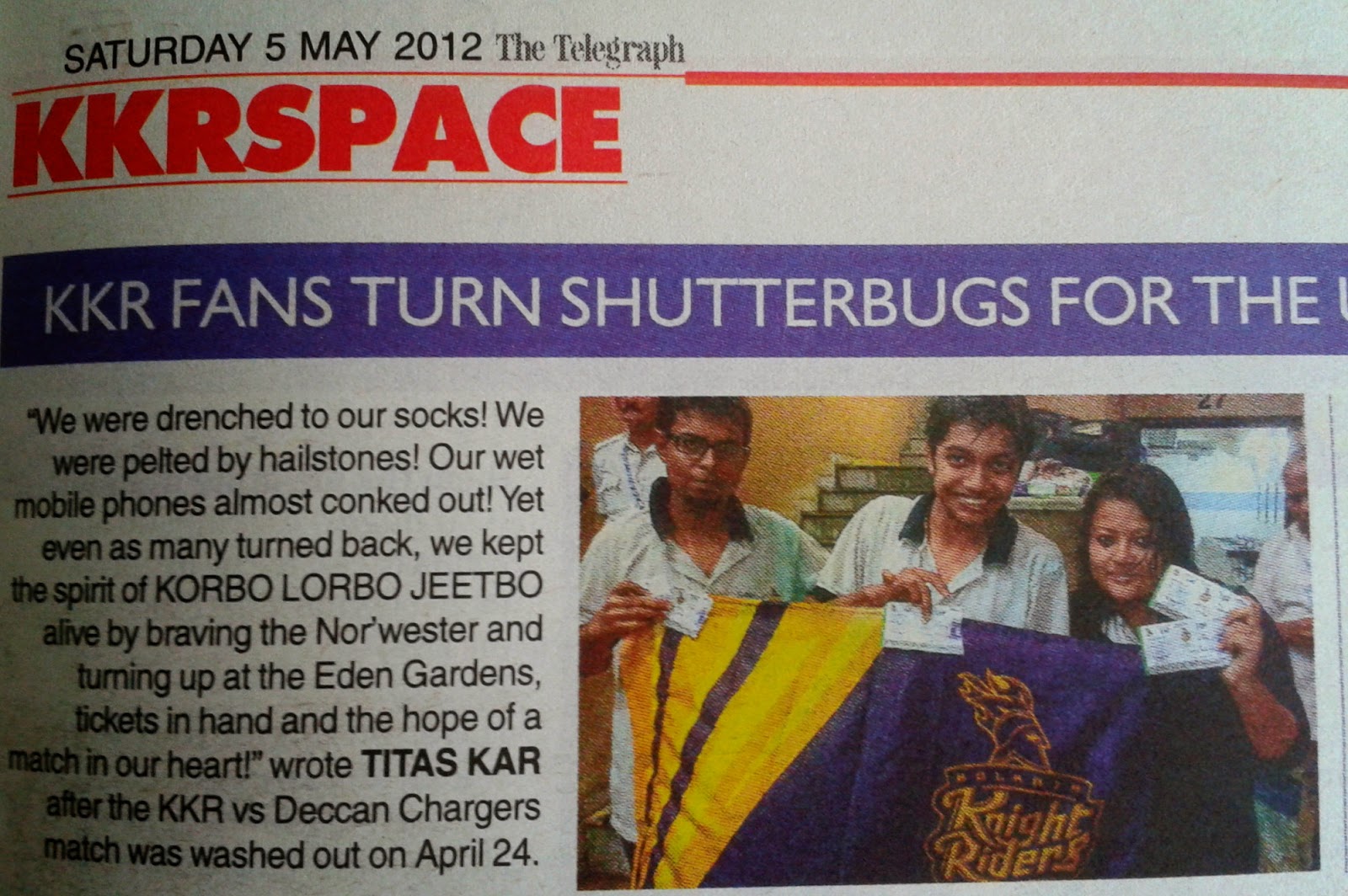 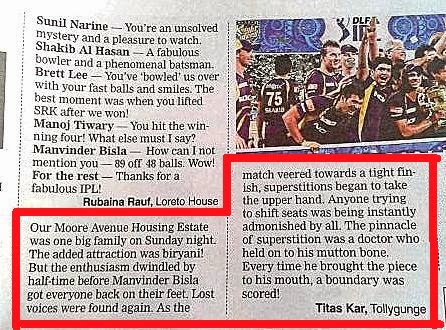 On the days of big matches, we take command of the community hall of our housing , and sit together in huge batches , crouched in front of a small TV , with superstitions flying left , right and centre! People aren't usually around to swap places if the team is doing well!!

I personally have sneaked in my mobile phone into the pages of my study books , if I happened to have my exams during IPL , refreshing the live scores pages every five minutes or so....when I wasn't allowed to watch the TV.

I've jostled with strangers on the road , to vie for my share of the view of the TVs inside electronics stores , to see a particularly riveting sequence of an IPLmatch ....of any team!!

Here's a sneak peak into how my KKRAZY ( crazy for KKR) pals spent some of the past few seasons , believing in the team's abilities:


we even managed to get access to meet the Knights in person in our city!!

Nowadays ....I often miss out on viewing the matches live on TV because of the hours I put in the hospital where I'm employed , but www.starsports.com has become a messiah ,aiding me in keeping myself up to date with the happenings on the ground !

I really adore the ZIP CLIPS section , that helps me actually see the best bits of a match in real short clips, that are suited for the mobile phone, and it has become a personal favourite , when i'm out of home !  The Zip Clips act as a rejuvenator at all times, when the duty hours get dreary, and I'm slogging it out , all alone in the wards , or am seated in the doctors' room for a breather !  Well done , Kanna Star Sports !!

This post is part of the Cricket Just Got Better activity by StarSports , in association with BlogAdda.